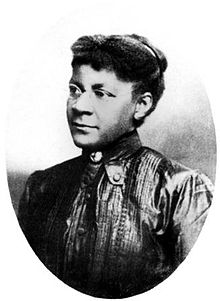 Amy Elmer presents, Montana’s first Career Woman: The story of a former slave, Sarah Bickford. Follow the life of indomitable Sarah Bickford who rose from slavery to become arguably the first career woman in the state of Montana. In 2012, Montana honored Sarah Bickford by inducting her into the Gallery of Outstanding Montanans in the Capitol Rotunda in Helena. A former slave who became one of Montana’s most prominent businesswomen, Bickford richly deserved this honor. She was the first and only woman in Montana—and probably the nation’s only female African American—to own a utility.

Amy Elmer grew up in Darby, Montana. It was here that she developed a love for Montana history and a fascination with the women who had an impact on the formation of the Treasure State. A history graduate from Montana State University-Billings she currently works at the Western Heritage Center as the volunteer coordinator.